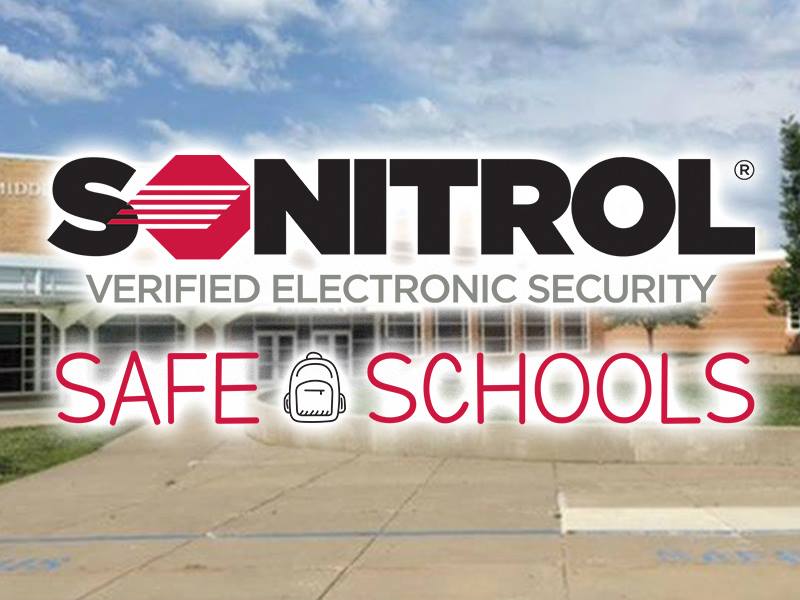 Sonitrol is one of the largest providers of school security nationwide, with over 12,000 schools protected by our verified security. From panic buttons, fire and smoke protection, to audio intrusion and verified video monitoring, we design comprehensive security solutions to ensure your students, staff, and building are protected 24 hours a day, seven days a week. Call us today to get a free consultation, tailored just for your campus at (800) 444-1191. 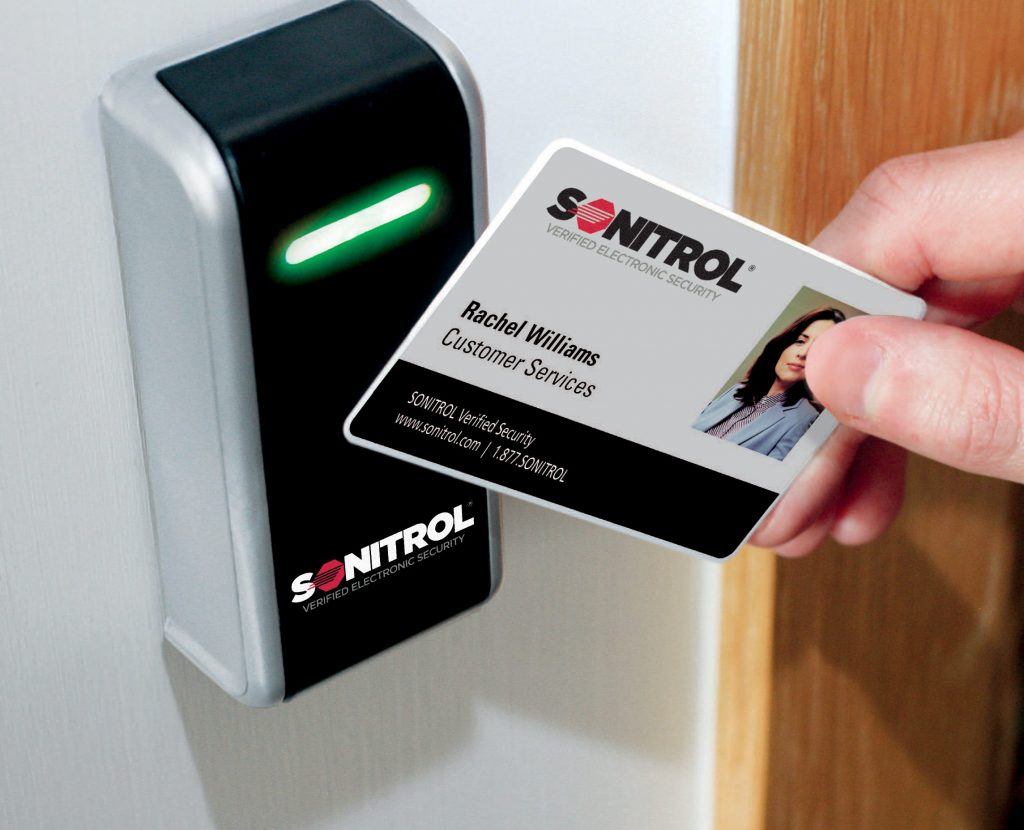 Sonitrol’s managed Access Control system allows businesses to track and limit entry to buildings and sensitive areas of facilities, protecting valuable merchandise and making the work environment safer for employees. If an employee is reassigned or leaves, the access card is easily deactivated or updated for a new employee. Access control reduces the threat of not only external, but internal theft, as well. Call us today for a FREE consultation with one of our security design professionals at 1 (800) 444-1191. 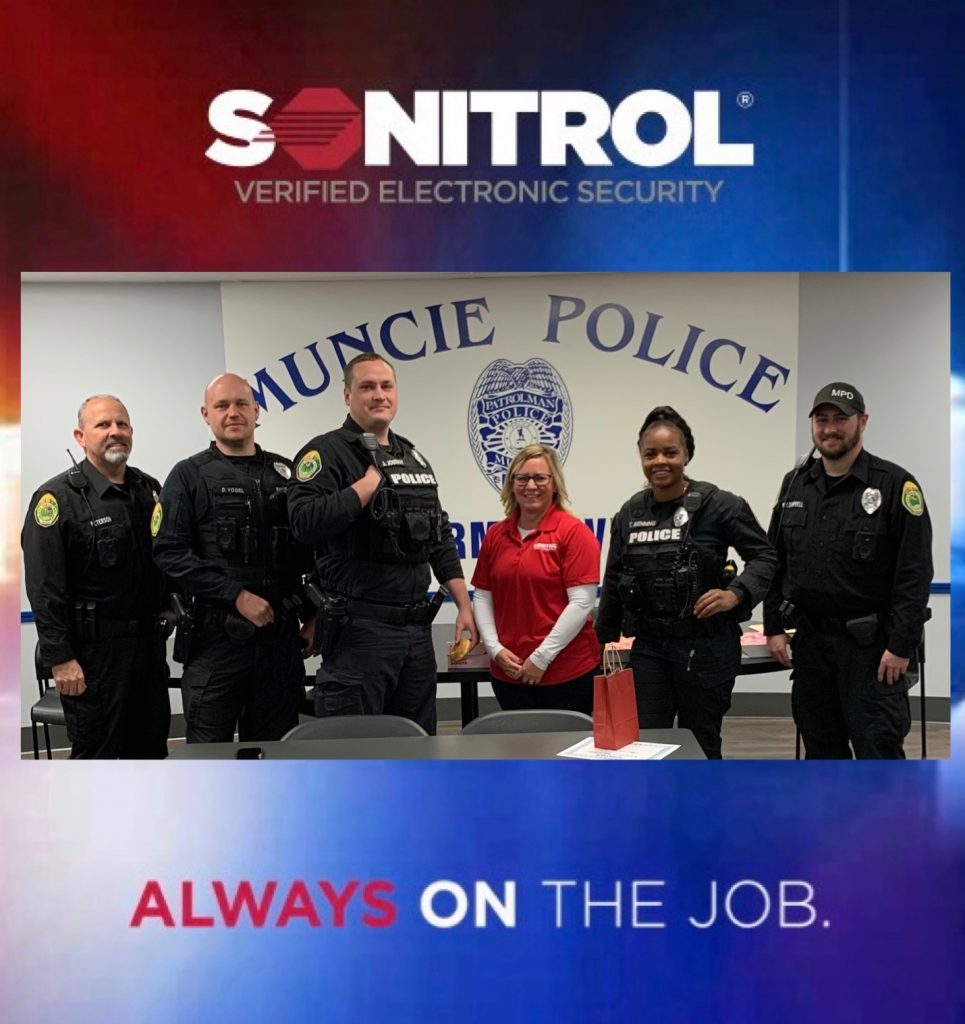 On behalf of TEAM SONITROL, we want to say thank you to Muncie Police Department for a recent apprehension. When our Central Station operator, DJ, received a panic alarm at a convenience store we monitor, he heard the stress in a woman’s voice from the audio feed and immediately dispatched law enforcement. A special shout out goes to Officer Vogel and Officer Thornton for apprehending the suspect who was allegedly exposing himself and chasing after a woman in the shop. Misty took donuts from Dunkin’ Donuts and certificates of appreciation to say thanks. Great job, DJ and Muncie Police Department! 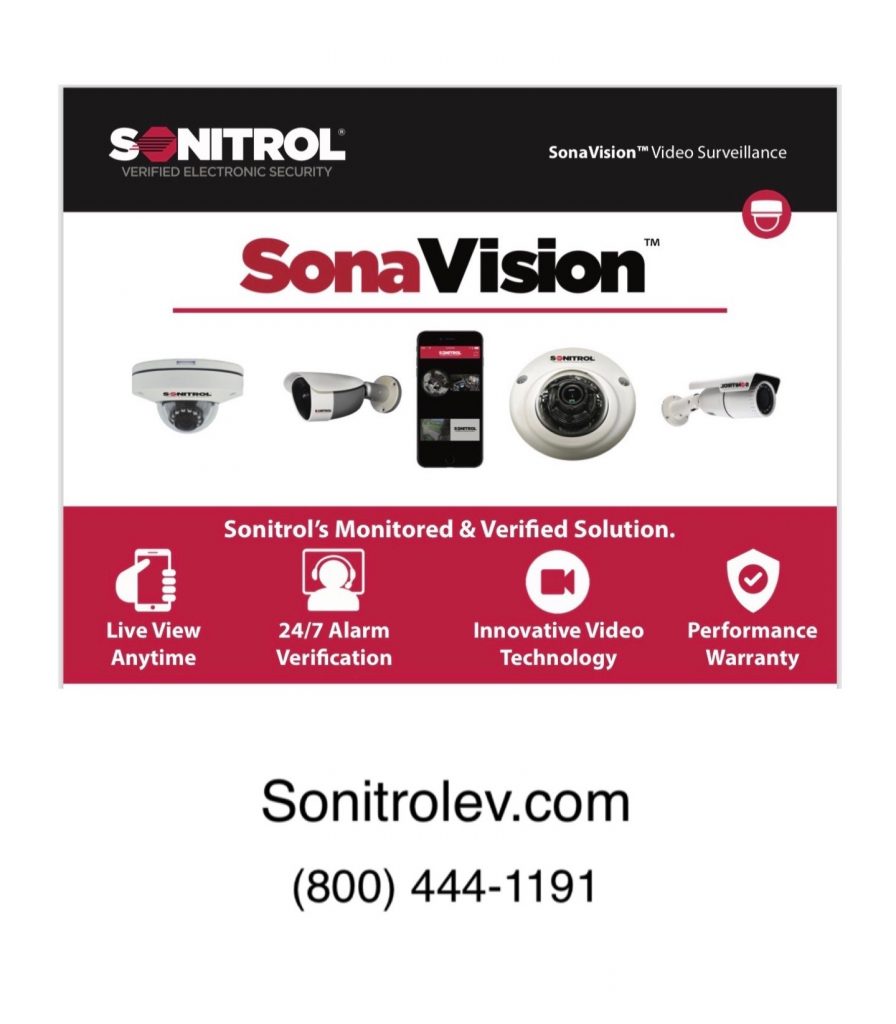 One of Sonitrol’s services, designed specifically to provide maximum security for commercial businesses is SonaVision, Verified Video Monitoring. This state-of-the-art video surveillance protects your business from internal and external theft. With our 24/7 monitoring team keeping an eye on your property, SonaVision allows peace of mind so you can manage your property from offsite. Retail areas, cash registers, loading docks, and warehouses are just a few locations our video services will ensure you are covered, while also protecting you from false slip-and-fall claims and similar threats. Our security design consultants will provide you with a FREE security assessment at (800)444-1191 and answer your questions about how SonaVision will protect your property. 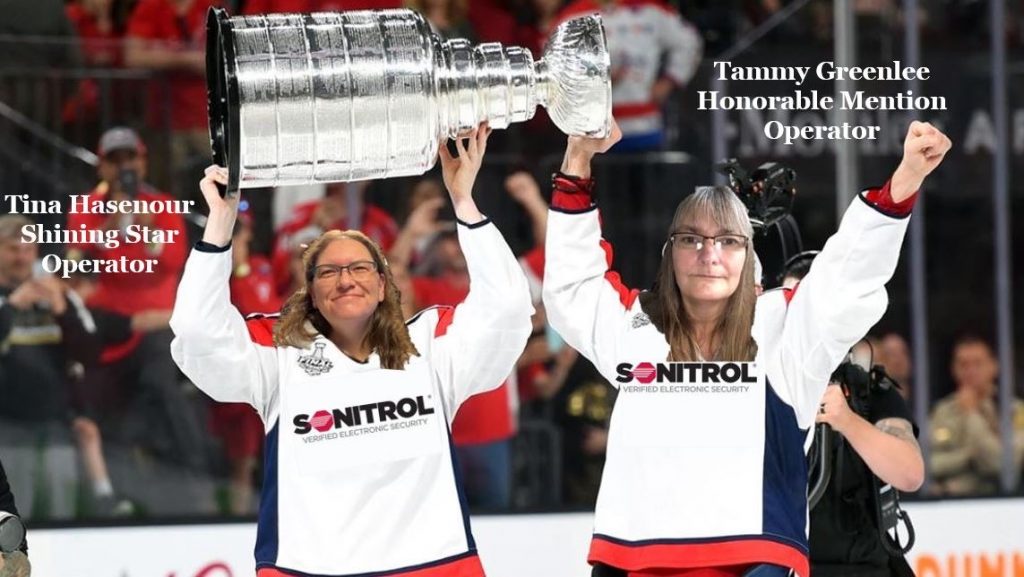 Sonitrol National Dealers Association has announced the winners of the 2021 National Achievement Awards, and not one, but two of our phenomenal Central Station Operators were chosen. Please join us in congratulating Tina Hasenour and Tammy Greenlee. Nationwide, operators were tested and those who scored the highest were nominated by SNDA for various categories. Tina was recognized as a SHINING STAR OPERATOR in the 2021 National Achievement Winners, and Tammy was recognized in the HONORABLE MENTION category for operators. We are so proud of Tina and Tammy. Because of people like them, who care about our customers, company, and community, Sonitrol continues to be a leader in the security industry. Congrats, ladies! And a special shoutout goes to Kevin Knust for making a fancy photo to celebrate his team!

Since the early days of Sonitrol, our verified security has stood out for its superiority in the market. Unlike a conventional system, our audio technology enables the monitoring team to verify a break-in and let police know this isn’t a false alarm. This technology leads to more criminal apprehensions. We love this flashback from our founder’s interviews:

A number of early apprehensions helped him win the police over. After that drugstore apprehension, Standring says, “We sold a low-end grocery chain. The guy already had an alarm system and our competition told him, ‘This’ll never work.’ He said, ‘Well, you’ve never caught anybody, so let me give this a try.’ The first week, we caught two in one store, one in another, and three in another. The police then started to take notice. They started asking questions and actually referred us to several customers.” 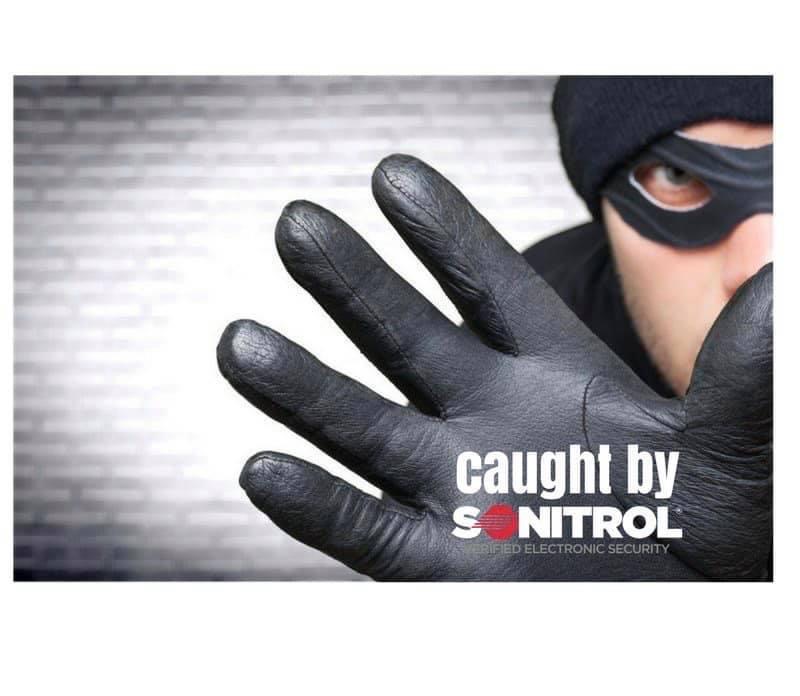 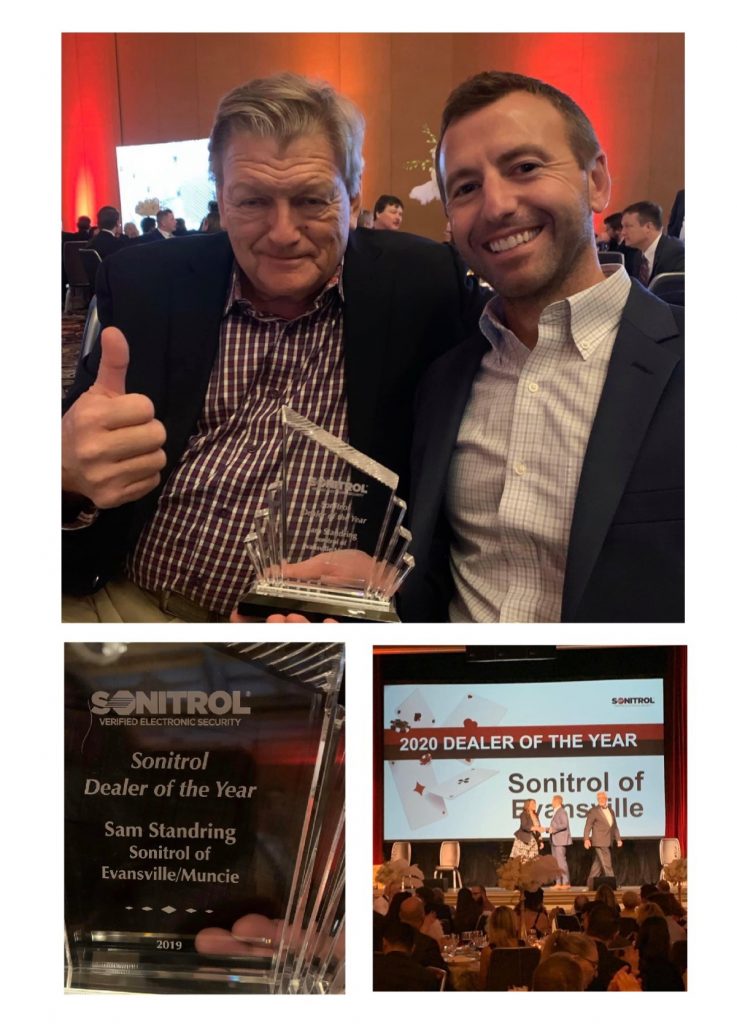 At this time last year, Sonitrol of Evansville and Muncie won Dealer of the Year at Sonitrol National Dealers Convention in Las Vegas. We look forward to the next convention, and we want to thank everyone at TEAM SONITROL for your dedication to providing dependable, verified alarms to our community. 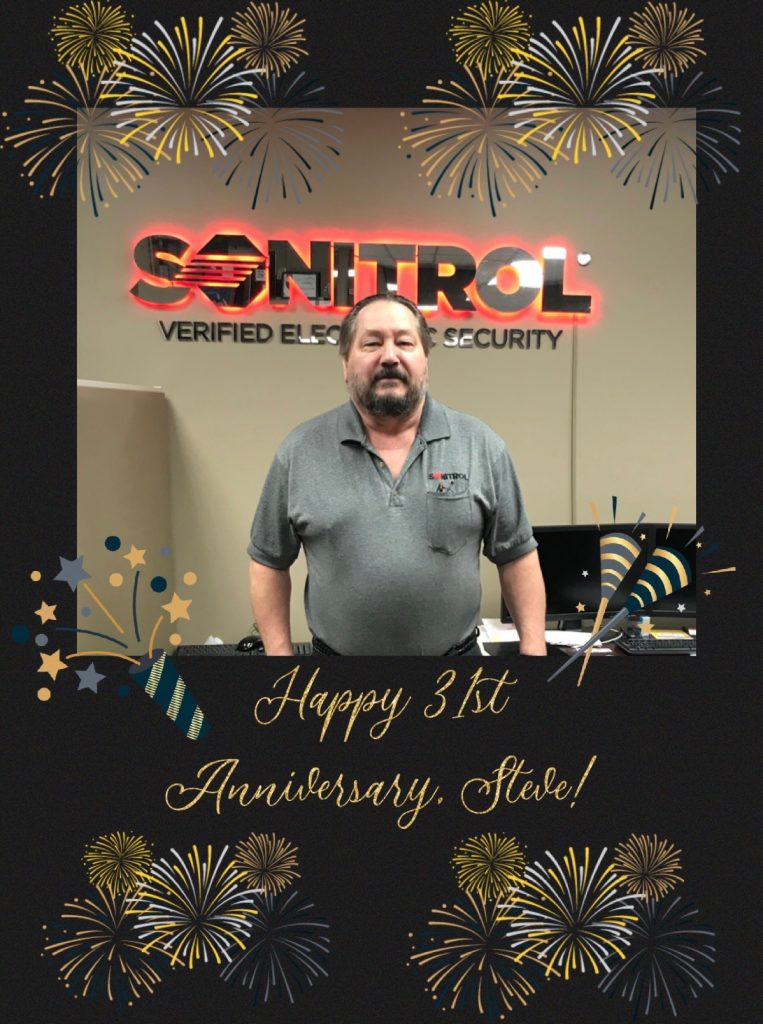 Today, Steve Weiss, celebrates his 31-year anniversary at Sonitrol! He’s not only our lead service tech; he does so much more. Team Sonitrol has become a family thanks to good people like Steve, who believe in our company, who work to provide innovative security to commercial businesses and properties, and who are always on the job. Join us in saying thank you and congratulations to Steve! 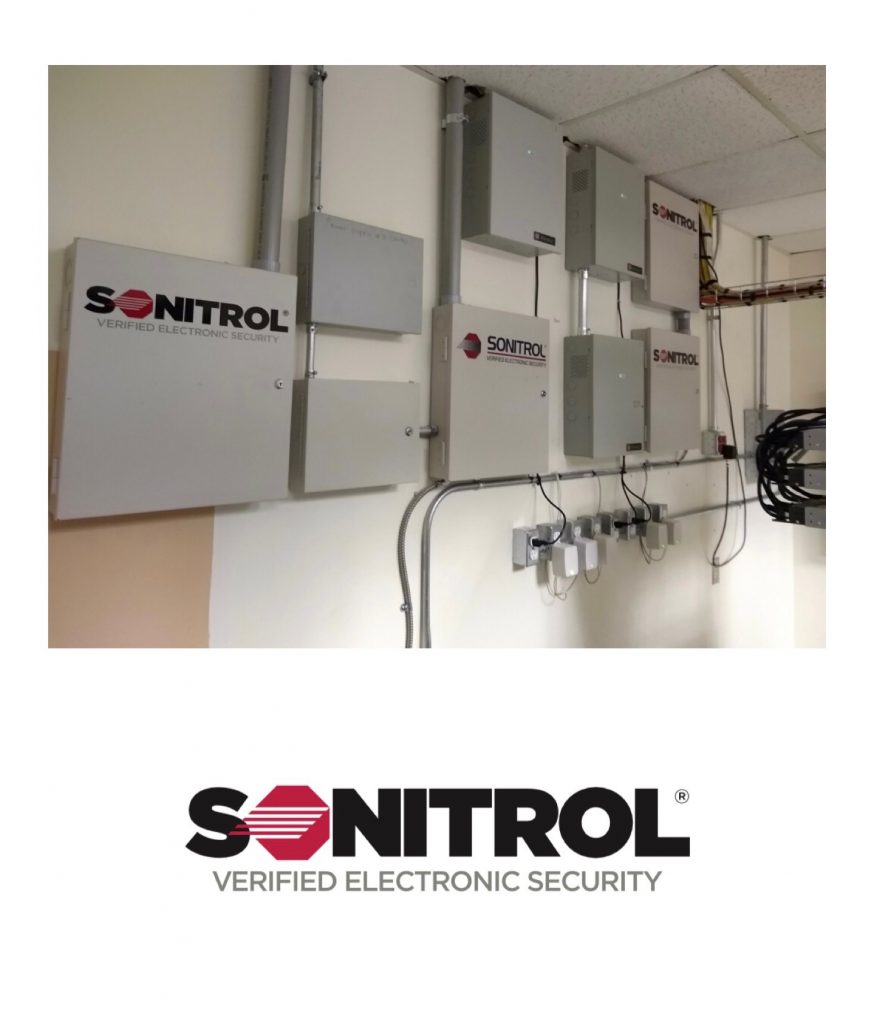 Our professional team has completed another installation at a Tri-state area school. Sonitrol offers comprehensive security, including verified audio and video detection, cameras and DVRs, U.L. fire systems, access control, and panic buttons to keep schools safe. To have one of our design consultants survey your school, contact us at 1 (800) 444-1191. Thanks for the picture of the panels, Ben and team! 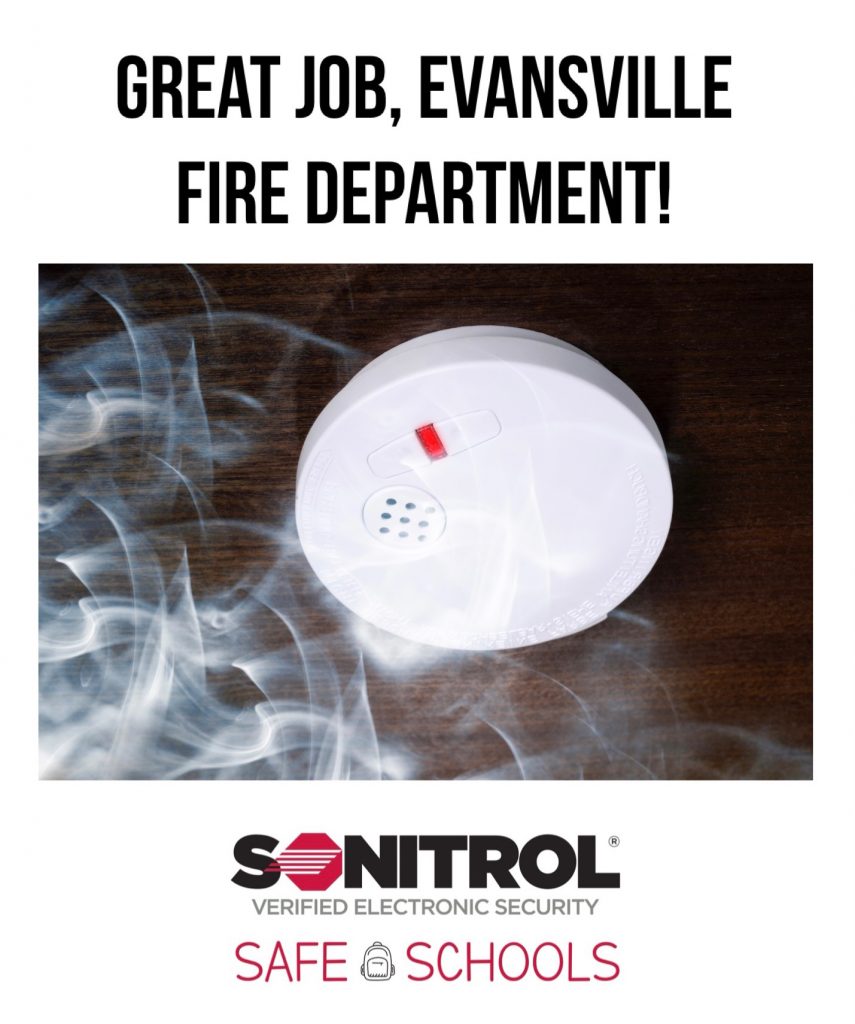 Sonitrol provides fire alarms, in addition to security, at local businesses and schools. Last night, our Central Station operator, Maye, received a fire alarm at Central High School and dispatched authorities. Evansville Fire Department extinguished the fire that had started in the light board inside the school’s auditorium, and no one was injured. Thank you, Evansville Fire Department, for serving our community! And nice job, Maye!